On January 12, the birth anniversary of Swami Vivekananda, I was going to the Bombay University to watch a play (for the first time in my life) based on the life of the great saint. Sitting besides me, in the local bus, was an old man, perhaps in his late 60s. I was in my usual khadi dhoti-kurta attire, and I was confirming with him whether the bus would go to Kalina, where the University campus is, and also asking him as to how long the journey would take. He said that the bus would take me there. I was relieved to hear that even he was to get down at the same stop as mine. I was definite to not miss the stop. But what he said next was not something that was heartening. There will be traffic in this route and it would take half an hour, he told me. The play was to begin at 3 PM and the time was already 2:40 PM and the bus driver had not yet come. I was getting restless, for I did not want to miss even a single scene of the play or the introductory talks.

The bus ticket from Kurla station to Kalina was Rs 10 and because I did not have change I gave a hundred Rupee note to the conductor. He returned the balance amount in notes of tens. I was counting the notes, and as I did I was slowly arranging the notes so that all notes had the 'Gandhis' on one side. As soon as I was done and kept them safely in my wallet, the man sitting next to me asked, "Are you new to Bombay?" I was, by now, quite used to getting this question from people primarily because of being clad in a dhoti in a city where even old men have switched to trousers, and also because of my Hindi which had a strong non-Hindi slang. As usual I smiled and said yes; I told him that I was from Kerala.

We then started talking casually and I was asking him where he was from, what he was doing, et cetera. When he told me that he was working in an automobile finance firm I wanted to know from him if he knew places from where I could get a used Ambassador car in a good condition. Our talks then shifted to old Ambassadors and Premier Padminis, and how they have almost disappeared from the Indian roads. He was eager to know whether these were still common in Kerala. We kept talking.

I did not realize that almost half an hour had passed until he grabbed his bag and signaled to me that our stop had come. He walked towards the front door and I followed him. As soon as we both alighted he told me, "Dekho aap Bombay mein aise lungi mein na ghoomna. Angrezi kapde pehen lo. Warna logon ko jaldi pata chalega ki aap bahar se aaye ho aur vo aapko ullu banaenge." (Don't roam in Bombay in lungi - dhoti is what he meant. Wear English dress. Or else people can easily understand that you are from outside and they might fool you.) He also told me not to ask auto-rickshaw people for routes and directions, and also to prefer asking old people to school or college going students as the former would guide better. He extended his hand for a handshake and then after the handshake I joined both my palms and told him namaste and dhanyavaad.

As soon as we walked apart I started rewinding the advice he had given me. The point about asking directions to old men than to students was in a way, and largely, correct, and not asking rickshaw drivers was even more true. What struck me, however, was his suggesting me to wear "English clothes." Our minds are still colonialist, it seems.

This is not the first time that I have heard or experienced such things. Once when I was taking leave from my neighbour's house saying it was time to leave for the railway station to catch my train to Madras, he had shockingly asked me if I was going in a dhoti. He had then almost ordered me to wear a trouser to which I smiled and said a no. On a previous occasion when I was in Bombay and was to attend a family wedding clad in a dhoti my relatives had close-to forced me to wear a trouser, or at least a pyjama, which again I had desisted. My father had unsuccessfully opposed my going to Delhi in a dhoti. I had attended my engineering degree convocation in my khadi dhoti-kurta attire. When my batchmates, seniors, and juniors saw me in that they laughed. Few asked me what was I doing and I said that since I wear this always and since there was no special dress code prescribed I did not find anything wrong in what I was doing. I had put the convocation robe that was mandatory over my kurta. And when the Governor of Tamil Nadu Mr K. Rosaiah, as the University's Chancellor, walked into the auditorium to give away the degree certificates, he was in the same attire as mine - dhoti, kurta, and a robe on top. I smiled and told my friends sitting next to me, "See the Chief Guest of the function is himself in this attire, and in this large gathering of over 1000 people only we two are in the same costume. It is rather a proud moment for me."

Wearing a dhoti is seen by few as something that is "inferior." We have to become more "English," they feel, just like the gentleman whom I met in the bus. Dhoti clad men (save politicians and saints) are "lower" or "illiterate" some others feel. Few feel that dhoti is fine but only for specific occasions or when going to a temple, and not for regular use. Few others feel that in cities one should do away with the dhoti, it is fine in rural areas. I refuse to be impressed by any of these arguments. To set the record straight, I must say that I have earned both ridicule and respect for being a habitual wearer of dhoti. Except when a dress code to the contrary is prescribed I feel no reason to do away with the humble dhoti and adopt a "gentleman" or "English" trouser. Thus when I go to Law college to attend classes I am in a white shirt and black trouser, the uniform prescribed for male students.

I wear a dhoti because it is our traditional dress. I feel pride in wearing it. And I wear only khadi ones to promote khadi and the rural artisans who are dependent on this. Not once have I felt ashamed for wearing a dhoti. In fact, I do feel ashamed when people tell me all sort of reasons in an attempt to convince me to give up wearing our own traditional dress and adopting an "English" trouser.

My mind is open to those who argue that a dhoti is not as comfortable as a trouser or a jean. Personally, I had initially found it very difficult as my waist line was thin and a regular length of dhoti had to be folded way too much before being tucked. I used to, and still do, cut a part of it to fit me. With practise I have managed to get the dhoti stay on without getting loose for almost a whole day. I now find it as comfortable as a trouser. But I do wear a jean, for instance, I did when I was travelling from Bombay to Ahmedabad on a winter night. But that is for protection from the bitter cold which a khadi single-length dhoti would not have given.

To all those who tell me to give up wearing dhoti, I say, I have no ill-will. Come up with a logical proposition that will satisfy me and I shall change. Not reasons like I have to be "English," or modern. I am traditional but not orthodox. 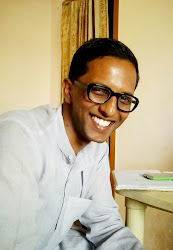